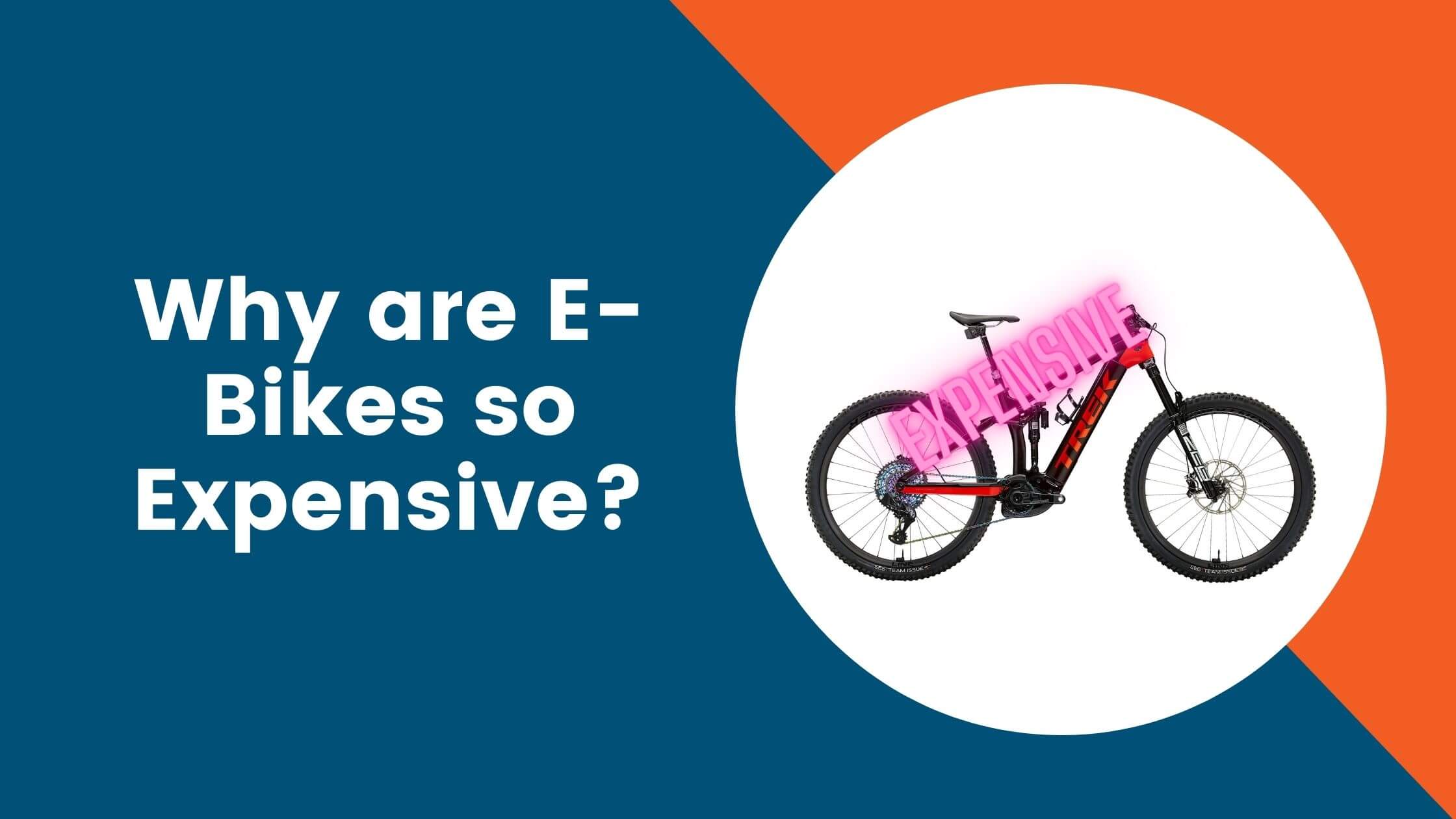 Electric bikes, sometimes known as e-bikes, are an exciting and engaging way to ride a bike, providing a novel spin on regular bike riding.

Some of your favorite bike brands sell them, although this is still a relatively young business.

It’s no surprise that electric bikes are more expensive to buy than traditional cycles.

Cheap parts are typically more flimsy than their more costly equivalents, and they frequently lack guarantees or tech support.

The battery, motor, and battery charger are three significant components that drive up the cost.

E-bikes also have greater operating expenses due to maintenance, battery replacement, wear and tear, and charging. Furthermore, because they are electric bikes, they must be extremely waterproof.

Manufacturing Factors That Contribute To The Cost of An E-bike:

Let’s have a look at the many production components that go into the overall cost of an E-bike.

Trek Bikes are one of the most expensive electric bikes.

The electric bike battery is a significant expense. It must be able to store enough energy to provide a decent range while also being rechargeable in a reasonable amount of time.

Batteries are sometimes considered as the most costly component of an e-bike, with prices ranging from a few hundred dollars for a moderate unit to well over $1,000 for some of the fancier models.

This is another component you don’t want to spare because it will determine how far you can ride.

Larger batteries are more expensive, so if you want a longer range on a single battery charge, you’ll have to pay nicely for it.

Lead-acid batteries, comparable to those used in automobiles, are still employed in electric bicycles. Despite the weight and restricted performance of such batteries, this is still the case in some countries.

The battery will play a key role in determining the longevity of your e-bike. Because rechargeable batteries degrade over time, you will need to replace the battery on an electric bike at some point.

Quality lithium-ion batteries, the most popular type for e-bikes (costing approximately $250), have a normal lifespan of 2-4 years depending on how they’re used and cared for.

A well-maintained Lithium battery that has been charged according to the instructions may be good for 1000 charge cycles.

As a result, your costs will be reduced. However, a lead-acid battery or a badly maintained Lithium battery will last considerably less time and raise your total cost of ownership.

Motors are also costly feats of mechanics, with even the most basic costing several hundred dollars.

This is yet another arena where prices may vary greatly depending on the quality and kind of engine used.

Each has advantages and disadvantages, but mid-drives are considered to be the finer of the two, having the maximum efficiency and the finest riding feel, among other things.

Instead of producing an additional power source, a mid-drive motor boosts your pedaling power within the chain drive.

They are more sophisticated than other types of motors due to a large number of components.

They will also require high-quality chains, as they will be subjected to significant strain.

Hub direct-drive motors are significantly simpler, but they are also restricted.

These motors operate in the front or back hub and have essentially no moving components since the motor just rotates around the axle.

These direct-drive electric motors may also produce electricity when braking. The quantity of usable energy gained on a genuine voyage, on the other hand, maybe fairly modest.

Gears are used in hub geared motors to reduce RPM and enhance torque output. These motors can freewheel.

They don’t have the drag problem that other types of electric bikes can have when they’re not powered by a battery and being pedaled regularly, therefore a geared hub bike behaves more like a traditional bike.

Using the bike’s gears is more complicated and probably more expensive initially, but it will pay off.

The throttle function provides power to your electric bike without requiring the user to pedal. It’s a really useful feature while climbing hills or traveling long distances.

A premium electric bike will often include an electronic instrument panel that serves as the ride’s information center.

Any electrical gadget must be completely waterproof or it will short out, it can also be irreparably ruined. As a result, an electric bike must be water-resistant.

The rider must carefully regulate all of the power in an electric bike.

As a result, some employ sensors to calculate how much electric help needs to be provided based on the rider’s actions. Others may utilize a throttle controller located on the handlebars.

Market Factors That Influence The Cost:

Let’s take a look at the numerous marketing aspects that affect the overall value of an E-bike.

While e-bike sales are rapidly growing, they remain a niche sector. As a result, manufacturers are unable to make materials and accessories in large quantities, increasing the cost of e-bikes significantly.

Unlike traditional bicycle producers, who may be pretty certain that they will sell a large number of bikes, e-bike retailers and manufacturers must continue to purchase and construct in smaller quantities.

As a result, manufacturers are unable to cut the price of each bike. E-bike prices are expected to stay expensive until they are in such high demand that makers can create them in big quantities.

It wasn’t until the last several years that e-bikes gained popularity. Previously, there wasn’t a high demand for them thus there weren’t many producers creating them.

It has manifested in e-bike pricing being expensive for several reasons.

The first is that, because of limited demand, and a small number of producers, the firms manufacturing dominate the market. Manufacturers have been able to charge high rates because there has been less competition pushing down prices.

E-bikes are a fairly new concept. Their global appeal is still inferior to that of traditional bikes.

Electric bikes may become a more popular product due to environmental concerns as well as a demand-and-supply scenario.

Prices are likely to fall as e-bikes gain popularity and demand. As demand grows, there should be greater competition and the capacity to mass-produce e-bikes.

It can contribute to drastically cutting the cost of an e-bike as more people recognize its use.

While it is still a recent development, there is a fair likelihood that they will become less expensive as bigger volumes are manufactured, and the technique gets more widely used.

I hope you know the reason why are e-bikes so expensive. If you are looking for a cheaper option, then you should try the below e-bike.

As an Amazon Associate, We (bikingmanual.com) earn from qualifying purchases.

bikingmanual.com is a participant in the Amazon Services LLC Associates Program, an affiliate advertising program designed to provide a means for sites to earn advertising fees by advertising and linking to Amazon.com.