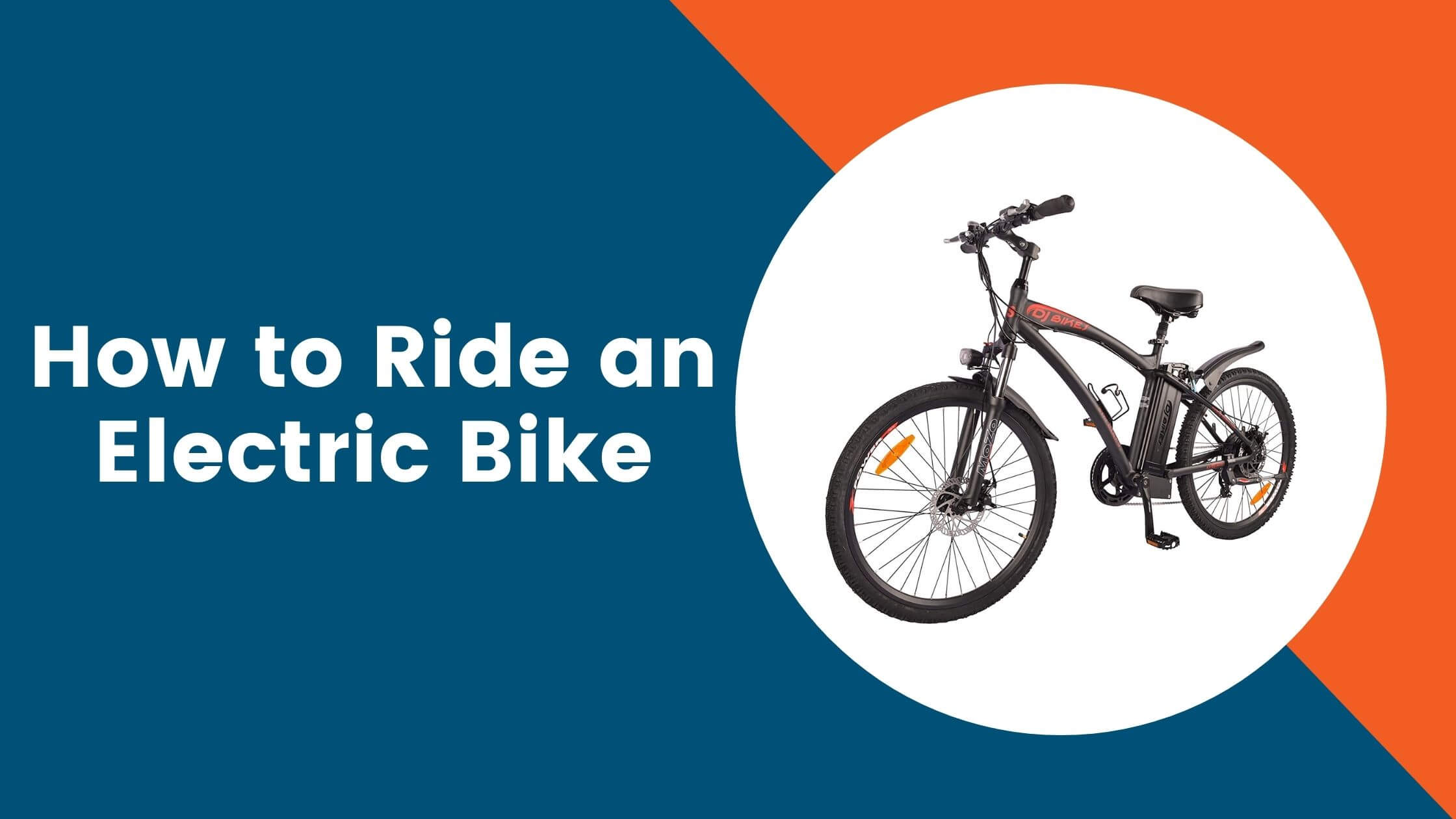 A bike is indubitably the most popular childhood memory for many.

Even with only a little effort, it is not very hard to fish out a few bike lovers in any area.

Thus, like any other popular article, bikes have undergone some evolution over time.

One among the sizable number of variants of a bike in the market, electric bike or e-bike, has become more and more popular among the general public lately.

But compared to the simple traditional mechanical bikes, these evolved bikes are a bit tricky to use at first.

Thus, the question “how to ride an electric bike?” is quite a popular one that usually floats among the new or potential prudent users of e-bike.

Why choose an e-bike?

Electric or not, riding a bike has always received a favorable light from environmentalists and physical trainers.

And with the introduction of e-bikes, riding a bike for long-distance has become easier than ever.

Features like pedal assist and full throttle, even attract the elderly and ones with low physical abilities to try riding a bike.

And not to forget, from helping reduce air pollution to helping maintain better physical condition, the benefits of riding a bike are many.

Statistics say that in the US, only one percent of the travels are done using bikes.

Many studies conducted under reputable institutions like the University of Wisconsin-Madison claim that quite a big number of deaths and diseases can be prevented if the number of travelers on a bike is increased.

Why is learning how to ride an electric bike important?

While they both look almost the same and work somewhat similarly, there are, nevertheless, a few points of difference.

The gravity of forgoing the initial step of learning how to ride an electric bike before using them can be seen through the alarming statistics of the number of deaths due to e-bikes in recent years.

In a study of the statistics of the number of deaths due to e-bikes in the Netherlands, the number of victims was doubled between 2016-2017 and continues to increase even now.

Among them, 75% of the victims were found out to be aged 65 or above. The major cause of deaths in the above cases being riders unable to properly mount and dismount the e-bike.

In another instance, Lyft, owner of Citibike, had to temporarily pull back around 1,000 e-bikes from New York City after a few dozen riders met with accidents while riding Citibike.

Commonly, the increase of e-bike riders would cause an increase in e-bike related accidents.

But to minimize the frequency, it is necessary to familiarize oneself with ways to handle an electric bike and its features before taking it out for a test drive.

Therefore, it is integral to understand how to ride an electric bike before going on an excursion in it.

How to operate an Electric Bike?

With an electric bike, it’s pretty easy to imagine yourself whizzing past others in the traffic.

And many accidents happen when someone attempts to make this a reality. It is pretty easy to turn on full throttle and then lose control of the bike quickly.

Reveling in the pleasant wind as your bike moves at high speeds can often be quite lucrative.

Still, it’s not a reason to take that newly brought e-bike out on full speed without learning how to ride an electric bike, and its do’s and don’ts first.

On most e-bikes, the battery is detachable, allowing you to take it near the charging port easily.

The first thing to keep in mind is to ensure that the battery is charged, locked properly, turned on, and plugged in before hitting the roads with the e-bike.

The most innovative feature of an e-bike is pedal assist and full throttle.

One should try both modes in a space to get a feel of the peddling force necessary to operate in both modes lest they surprise themselves on open roads and risk an accident.

One may even disable both options.

Between the handlebars, all e-bikes sport a display to control the features of the bike.

One should find the battery level and speedometer on it.

All e-bikes have different levels for pedal-assist which one usually controls through this display.

The different levels here indicate how much the motor is going to assist while peddling the bike. One must set it according to their own comfort level.

Differences in riding an e-bike

While learning how to ride an electric bike, it is important to understand the differences between riding e-bikes and conventional bikes.

Below are some differences and things to keep in mind while riding e-bikes.

While using the motor of an e-bike, one should ensure to maintain a steady seating position.

An unstable seating position may confuse the motor and make it behave erroneously.

It is advised to keep both wheels off the e-bike on the road while using its motor.

Failure in maintaining traction can cause the bike to lose balance or the motor to behave weirdly.

Making turns on an e-bike is slightly different than on conventional bikes.

The reason for this is the presence of the motor closer to the ground.

Due to this, an e-bike generally has a comparatively lower center of gravity making the turns a tricky case for new riders.

While simple turns at low speed should not be a problem, at high speed, one should make sure to stop pedaling, stand up slightly, and gentle incline to the turn to make the bike follow the curve.

As the center of gravity on an e-bike is low, one should stand up slightly and put their weight on the handlebar while braking.

This will lift the center of gravity higher and improve stability while braking.

Understanding the basic differences and the need to differentiate riding a traditional and electronic bike helps one understand the reason why one should learn how to ride an electric bike. Below are some safety tips one should follow while riding an e-bike.

It’s common while pedaling for a new rider to put more force than necessary with the pedal assistant turned on, making the first ride scary.

A new rider should first start on a flat and empty surface to first get a feel of how much force is necessary while pedaling before going out in traffic.

The structure and weight of an e-bike are slightly different from traditional bikes.

The heavyweight along with higher speed makes it a different creature than traditional bikes while braking.

One of the first things to learn on a new e-bike is undoubtedly the power of its brakes.

It is a good idea to practice with the brakes before going out in traffic.

E-bikes are known to break conventional understandings of a traditional bike.

Most drivers on roads are used to the slow speeds of a bike and may make an error when an e-bike running on speeds of 20-26 mph pass around them.

It’s pretty common for drivers of large vehicles to not give too much attention to bikers.

This is because conventional bikes don’t move at high speeds.

Due to this understanding, most drivers usually make errors while driving when an e-bike zips past at 20 mph.

This slight oversight often leads to accidents. Thus, it is better to draw attention with light or a horn to prevent such oversight.

In case while riding an e-bike the motor doesn’t stop and keeps going on, one should immediately try to stop the motor and get on the side of the road.

There are two ways to stop the motor in such a case.

The first way is to apply the brakes. The second way is to turn off the controller, which will, in turn, cut the motor completely.

The best course of action after such an incident is to get the bike checked for the cause of such behavior of the motor.

The features of e-bikes make it a good choice for the elderly and young with mobility issues.

This, in turn, means that this group is more likely to use an e-bike.

Thus it is a good idea to check the ease of mounting and dismounting while purchasing a bike. The weight of the bike should also be considered.

Most of the accidents related to e-bikes are actually related to accidents while mounting or dismounting the e-bike.

Thus, it is better to not overlook this aspect and ensure the rider is at ease with the weight of the bike and can easily mount or dismount.

7) Understanding that it’s just a bike

The speed of an e-bike can easily mislead a rider into thinking otherwise but at the end of the day, it is only a bike.

A rider should understand and be cautious while going into full speed and enjoying the wind. Proper bike safety measures should be followed while riding an e-bike.

This is one of the oldest and most common safety tips for any two-wheeler rider.

Always remember to wear a sturdy helmet before going out on your e-bike.

One of the common but necessary things to do before any ride is to check tire pressure.

A tire in optimal condition is imperative for a safer journey.

Failure in doing this may lead to troubles while driving and eventually, a completely damaged tire.

Things to do after a ride

It is a good practice to charge the battery of an e-bike after a journey, if possible.

This should be the first thing on the checklist after a ride on an e-bike. A healthy battery is comparable to a much smoother journey on an e-bike.

Even after a ride, one should not skimp on checking the tire pressure and condition of tires on their e-bike.

This check ensures that the next journey on the e-bike will also be smooth.

Do you wanna ride an E-bike? Riding the best fat tire electric bike will be a great idea.

Do electric bikes help the environment?

Since electric bikes run on energy, that energy isn’t entirely renewable or natural.

It is because of this reason that conventional bike trips are more environmentally friendly than electric bike tours.

However, electric bikes can be a great alternative to car trips, which cause significant environmental damage.

There are people who are getting their cars out even if the ride is just a couple of miles long.

When it comes to travel, electric bikes have the potential to be an eco-friendly and efficient method.

You can ride faster on an electric bike to reach your destination.

Next time you drive to the nearest destination, you should think about how an electric bike can make a difference instead.

Before I conclude, if you still want to learn more, then you can read the article of Cycling News to get more idea.

So, what are you waiting for? You’ve already learned about how to ride an electric bike.

Tear down the packaging of your new e-bike. Do a test run on an empty lot.

Practice the things you should look out for. Plan the course of your trip. Fill a water bottle.

Make necessary preparations. And zoom out on your e-bike.

Don’t forget to learn and practice climbing uphill with your bike, braking and get a feel on how different or similar an e-bike is as compared to a conventional bike.

Also, the tire check and battery check are very important after that pleasant journey. So don’t forget that.

As an Amazon Associate, We (bikingmanual.com) earn from qualifying purchases.

bikingmanual.com is a participant in the Amazon Services LLC Associates Program, an affiliate advertising program designed to provide a means for sites to earn advertising fees by advertising and linking to Amazon.com.